What does brachycephalic mean?

Brachy means shortened and cephalic means head. Therefore, brachycephalic dogs have skull bones that are shortened in length, giving the face and nose a pushed in appearance. Due to the shorter bones of the face and nose, the anatomy and relationship with the other soft tissue structures are altered; some of these changes can cause physical problems for the affected dog. 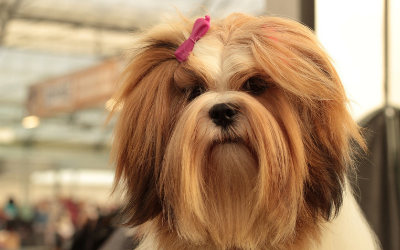 What is brachycephalic airway syndrome?

Dogs with stenotic nares have abnormally narrowed or small nostrils; the narrowing restricts the amount of air that can flow into the nostrils.

Nasopharyngeal turbinates are ridges of bone covered by tissue that help humidify and warm air that is inhaled. When these extend past the nose into the pharynx (the area behind the nose and mouth), they cause variable amounts of airflow obstruction.

A dog with an elongated soft palate (the soft part of the roof of the mouth) has a soft palate that is too long for the length of the mouth; the excess length partially blocks the entrance to the trachea (windpipe) at the back of the throat.

Laryngeal collapse is caused by the chronic stress placed on the cartilage of the larynx by other features of brachycephalic syndrome. Eventually, the larynx (voicebox) is not able to open as wide as normal causing further restriction in airflow.

A hypoplastic trachea means that the trachea has a smaller diameter than normal.

The laryngeal saccules are small sacs or pouches that are located just inside the larynx; these saccules evert (turn outwards) or are sucked into the airway by pressure associated with the increased respiratory effort caused by the stenotic nares and/or the elongated soft palate. Everted laryngeal saccules will further obstruct airway flow.

What other problems can occur as a result of brachycephalic airway syndrome?

Brachycephalic syndrome has been linked to changes in the lungs, as well as the gastrointestinal tract including bronchial collapse, gastroesophageal reflux, and chronic gastritis. In bronchial collapse, the bronchi (the airways that connect the trachea to deeper airways of the lungs) weaken and collapse causing further obstruction. Gastroesophageal reflux occurs when intestinal fluids flow back into the esophagus (the tube that connects the throat to the stomach).

What are the signs of brachycephalic airway syndrome?

Any of these upper airway abnormalities can cause increased airway resistance, increasing the effort required to inhale. Most dogs with this syndrome are able to breathe more easily through their mouth than their nose. Generally, the more abnormalities present the more severe the signs.

"Generally, the more abnormalities present the more severe the signs."

Mildly affected dogs will have noisy breathing, especially with exercise, and most will snort when excited and snore when relaxed or asleep. Severely affected dogs have more pronounced airway noise, appear to tire easily with exercise, and may collapse or faint after exercise. Other signs may include coughing, gagging, retching, and vomiting. Signs are often worse in hot or humid weather.

Dogs with impacts to their gastrointestinal tract may show signs including retching, vomiting, or lack of appetite.

Over time, dogs with this syndrome may develop other secondary problems, including inflammation of other structures in the airways. In the long term, the increased effort associated with breathing can put an increased strain on the heart.

Most dogs are diagnosed with brachycephalic airway syndrome between 1 and 4 years of age. Both males and females appear to be affected equally. Dogs with multiple abnormalities tend to develop problems at an earlier age.

How is brachycephalic airway syndrome diagnosed?

This syndrome will be diagnosed on the basis of the dog's breed, clinical signs, and results of a physical examination. Stenotic nares can usually be diagnosed on visual inspection. Diagnosis of an elongated soft palate, everted laryngeal saccules, or other associated anatomical changes in the mouth will require heavy sedation or full general anesthesia.

Since dogs with this syndrome have an increased risk of complications associated with general anesthesia, your veterinarian will recommend pre-anesthetic blood work and chest X-rays to evaluate the general health of your dog and minimize the risks. If your pet undergoes general anesthesia to diagnose this condition, your veterinarian will recommend that any necessary surgical correction be performed at the same time.

What is the treatment for brachycephalic airway syndrome?

Since obesity worsens the signs of brachycephalic airway syndrome, weight loss is an important part of treatment if your dog is overweight. For dogs with only mild or intermittent signs their condition may be managed conservatively by controlling exercise levels, avoiding hot or humid conditions, keeping the dog in an air-conditioned area during the summer, and avoiding stress.

Corticosteroids, nonsteroidal anti-inflammatory drugs (NSAIDs), and oxygen therapy may all be useful for short term relief of airway inflammation or respiratory distress. However, medical management of this condition does not correct the underlying anatomical abnormalities.

How successful is surgery?

The earlier that the abnormalities associated with this syndrome are corrected, the better the outcome. The condition worsens over time and may cause other abnormalities. Early correction of stenotic nares and/or an elongated soft palate will significantly improve airway function and may prevent development of everted laryngeal saccules.

In the early post-operative period, swelling of the surgical sites may occur and interfere with breathing. Therefore, your veterinarian will closely monitor your pet after the surgery has been performed. The degree of monitoring that will be necessary depends on the surgical procedures that were performed.

What is the prognosis for a dog with brachycephalic airway syndrome?

The overall prognosis for pets with brachycephalic syndrome depends upon how many anatomic abnormalities are present, and how old the dog is at the time of diagnosis and treatment.

Dogs under two years of age at the time of surgical correction have a better post-operative prognosis than dogs that are older. Dogs that only require surgical correction for stenotic nares and/or an elongated soft palate have a better prognosis than dogs with more defects. Dogs with a hypoplastic trachea have a variable prognosis. Dogs that have other problems such as allergic airway disease or that have developed secondary problems from the airway distress have a poorer prognosis. However, appropriate management can significantly improve the quality of life for these pets.

Is there any other advice?

Dogs with brachycephalic airway syndrome should be fitted with a harness that does not tug at the neck area. It is not advisable to use a regular neck collar for these dogs, since the collar can put undue pressure on the neck.

"Dogs with pronounced breathing difficulty or dogs that require surgery to correct airway obstruction should not be used for breeding."

This syndrome is directly related to the conformation or breed standard for brachycephalic dogs. Dogs with pronounced breathing difficulty or dogs that require surgery to correct airway obstruction should not be used for breeding. It is usually recommended that these dogs be spayed or neutered at the same time that the surgical correction is performed.

© Copyright 2018 LifeLearn Inc. Used and/or modified with permission under license.